When Australian actress Belinda Bromilow walked the Oscars red carpet alongside her first-time nominee husband, our eyes were on her earrings, which will auctioned online to raise funds for Mummy’s Wish. 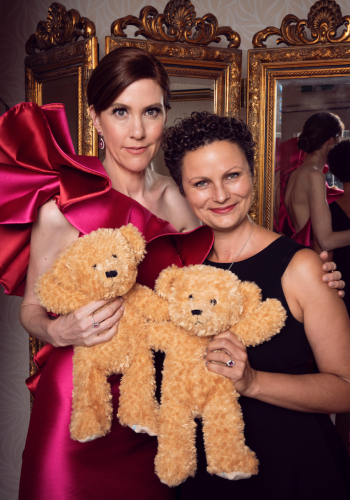 “I’d discussed with Belinda the idea of donating her bespoke earrings to Mummy’s Wish after the Academy Awards and we both agreed that they were a perfect charity given both of our backgrounds of cancer treatment and motherhood,” Nicole said.

The women who met while studying acting at the WA Academy of Performing Arts, were both diagnosed with cancer when their children were young—Belinda with bowel cancer and Nicole with breast cancer.

Belinda was diagnosed shortly after giving birth to her first son.

“I had a bowel resection and illiostomy bag for 3 months while I healed from surgery. Fortunately the cancer hadn’t spread to my lymph nodes, so I required no further treatment however facing such serious surgeries and my own mortality was an enormous challenge with a newborn,” Belinda said.

“It occurred to me more than once during this time how incredibly lucky and blessed I was to have the support of family and friends, and how infinitely harder my journey through would have been without it.

“I thought of single parents, those under financial pressure, people without a community to rally around them. Mummy’s Wish is that support for many out there who are dealing with cancer and it is an absolute honour and joy to help them in this small way.”

Nicole, who lost both her parents to cancer when she was young, was diagnosed with breast cancer in late 2017, when her children were three and six years old.

“I underwent a reconstructive mastectomy, six months of chemo and five weeks of radiation and Mummy’s Wish were a great support during my treatment,” she said.

“They were a reassuring and comforting presence on a psychological level and provided us with practical help of three months of cleaning during treatment. They also sent two comfort bears with voice recorders inside that my kids still love and hug to this day.”

“Positively parenting small children during cancer treatment has to be one of the hardest things I’ve ever had to do in my life and it’s great to know that we will be helping to support other mothers during such a difficult time,” Nicole said.

Mummy’s Wish CEO Emma Bryant said, “When you’re living with cancer, it can be difficult to cope with a wide range of emotions, including fear, anger and sadness and Mums can also find it hard to carry out everyday tasks such as food shopping or cleaning their house.

“We are so grateful to Belinda and Nicole for this wonderful gesture; the money raised through their auction will enable us to provide practical support to more women to help them manage the distressing impact her illness has on their families.”