Lennon Heads Locals Shave It to Raise It

The three locals brought a small community together to make a huge difference, fundraising close to $20,000! Proceeds were split between Mummy’s Wish and Our Kids, a local organisation raising funds for paediatric oncology.

Jess found out about Mummy’s Wish through her accountant, whose wife received our help while undergoing treatment.

When asked why they chose to shave their heads, Jess shared that ”the three of us – Brendan, Myla and I – thought it was the least we could do to show support and help.”

All three had been personally affected by cancer.

Jess was called back from her city dream to nurse her mother through the final stages of cancer back in 2014 and wanted to help families experiencing the same challenges.

“My mum died eight years ago, my friend’s mum has just been put in remission of breast cancer and a few of our friends’ children have suffered cancer and had to travel back and forth from Brisbane,” Jess said.

For Brendan, his mother was diagnosed with breast cancer last year. Before shaving his head, his two daughters aged 10 and 12 had never seen their dad without his recognisable long red hair. 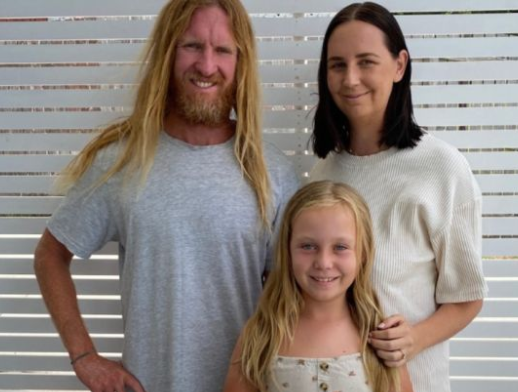 At just eight years old, Myla had already seen the effects of cancer on friends and family and wants to do her part to give back.

The team went live when they shaved their heads to show they cared for mums and children with cancer. They also organised a raffle, with many location organisations donating prizes.

We would like to extend a huge thank you to Jess, Brendan, and Myla, and the Lennon Heads community, for their generous support. The funds you have raised will help provide vital practical support to mums with young children undergoing cancer treatment.

Interested in organising a fundraiser? Why not register it with Mummy’s Wish.