Mother of two and Victorian local Diana was diagnosed with papillary carcinoma at the end of May in 2021. Just a month after surgery, she made the decision to go Dry during July to give back to Mummy’s Wish. She shares her story with us. 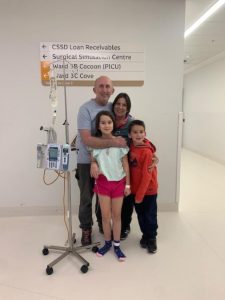 Diana’s cancer journey began after a routine screening mammogram in early May. Two weeks later, she received a follow-up phone call that would change her life.

“I had started the Breast Screen Program early as my younger sister passed away due to breast cancer six years ago. A lump was discovered on my right breast so an ultrasound and a biopsy were required. A week later and I was diagnosed.”

Diana remembered feeling sick when she got the call. As a wife and mother of two – a 10 year old daughter, Emily and 8 year old son, Jamie – she was extremely worried about her family.

After an initial MRI and biopsy, Diana underwent her first surgery on the 4th of June to remove the lump and surrounding tissue. This was unfortunately unsuccessful, so she underwent another surgery to remove more tissues.

“When that was unsuccessful, we made the drastic decision to undergo a double mastectomy, this was the only decision that we could make to make sure I would be around to see my children grow up.” 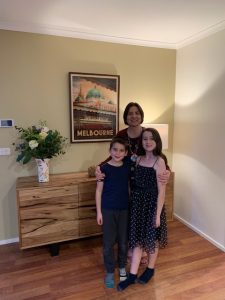 Diana would do whatever she could to be there for her children. The nightmare was made worse as her daughter, Emily, also fell unwell at the time of her mastectomy operation.

“Following my mastectomy, I spent 6 nights at the hospital. This was an extremely challenging time for all of us as my daughter Emily suffered a burst appendix and had to undergo emergency surgery the day after I had my surgery.”

“All this had taken place in the space of 6 weeks; it was a terrible time as all I wanted to do was look after my children but I couldn’t, I was too unwell and I felt helpless.”

Thankfully, Mummy’s Wish was able to help Diana navigate the difficult conversations she had to have with her children, ease the family’s burdens through a grocery voucher and offer support and comfort via the help of a support coordinator.

“Mummy’s Wish has been a fantastic support to us as a family, the supportive phone calls from Kelly… and the Coles voucher for all those little emergencies made us all feel very supported.”

With her daughter in the children’s hospital, Diana’s husband moved into the hospital to stay with Emily. Luckily,  her son Jamie was able to stay at his nephew or grandpas house.

“The comfort bears were especially helpful for Emily when she was in hospital and Jamie when he was staying at his nephews… I will be forever grateful for the wonderful support that Mummy’s wish shown my family.”

Mummy’s Wish is incredibly grateful to Diana, and the other Mummy’s Wish mums, who chose to participate in Dry July. Thank you so much for helping us provide practical support to other mums undergoing cancer treatment.

Find out how Mummy’s Wish has supported more mums with young children by reading their stories.