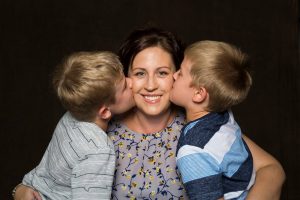 Annette Azzopardi, passed away on the 12th March 2019 just 16 months after first being diagnosed with Ovarian Cancer. Her sister Benita shares her story and why the annual Mummy’s Wish Hike is so important to Annette’s family and friends.

Annette was first diagnosed with Ovarian Cancer in November 2017, one week after her 38th birthday. With the news she had Ovarian Cancer, dubbed ‘the disease that whispers’ due to the subtle and unremarkable symptoms it exhibits, the news came as a complete shock to everyone.

At the time, Annette and husband Alan’s young boys, Riley and Logan were aged only 6 and 3 years. What followed was 7-months of trips down to Brisbane for surgery, scans, chemotherapy and doctor appointments. It also meant missed milestones such as her boys first days of school and kindy which broke her heart not being there.

After a year which she said, “she would never wish upon her worst enemy” Annette was given the all clear. To celebrate being healthy again, Annette and Alan climbed Walsh’s Pyramid in Gordonvale. ‘The Pyramid’ is the highest free standing natural pyramid in the world! It is 922 metres tall and the trek is approx. 6km total. The last 1km is incredibly challenging and steep and is challenging for even the fittest of people, let alone someone who had just recovered from cancer. 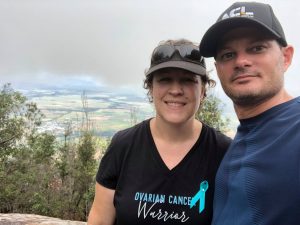 Annette was so grateful for the help provided by Mummy’s Wish, in the way of recordable teddy bears for the boys and regular house cleaning, she wanted to share her story and raise money.

Those who knew Annette would acknowledge what a private person she was. For her to post on Facebook about her illness and recovery on such a public forum is testament to the level of gratitude she felt for the assistance provided by Mummy’s Wish.

Annette was so surprised that she raised over $3,000 in just a week for Mummy’s Wish! She had to keep increasing the fundraising goal. Her and Alan completed the climb, although it wasn’t easy. Annette was determined to do it without hiking poles (or walking sticks she called them) and Alan told us years later that she wouldn’t accept his help either. She was so tired she had to lift her legs with her arms to physically get over logs or take steps down. Her determination to compete the climb to celebrate being healthy again amazed everyone who knew her. 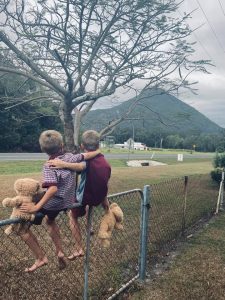 Devastatingly, about a month after the climb, Annette received the news her cancer had returned quite aggressively, and she was admitted into the Mater Private Hospital in Brisbane immediately. Annette was a favourite with the hospital staff, quietly spoken she never complained and managed to still smile.

Annette returned home to Cairns, however, she was never out of hospital long since her diagnosis in December. Ovarian Cancer really is an insidious disease and Annette could not understand how she could have such disease and still feel relatively ok. Behind her smile, we never really comprehended how sick she was – which made her climb up the Pyramid a few months earlier even more remarkable.

After Annette passed away and I got to know some of her friends, mainly through the boys at school, I got the sense that people wanted to help and do something in her memory. In 2020 a group of friends and family organised a hike up Walsh’s Pyramid in memory of Annette.

I am a strong advocate for being out in nature to help with mental health, and I have certainly needed my nature time outs since Annette passed away. This hike in her memory was advocate the healing nature can provide, to celebrate being healthy and to raise money and awareness for Mummy’s Wish as it was a charity close to Annette’s heart. 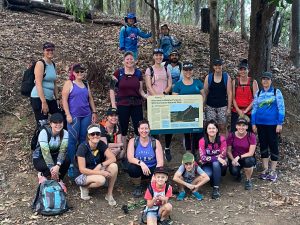 A group of 20 family and friends – including Riley and Logan who hiked half-way (still a 2 hour + hike!) gathered and completed the hike. We managed to raise $5,746 for Mummy’s Wish. The best part though was the coming together of people who love Annette so dearly to continue to do something for her.

I think many gained a deeper appreciation of her strength to do such a challenging climb after being so unwell.

In 2021, we organised another hike up the Pyramid (and raised $13,205!). The Mummy’s Wish team was keen to share Annette’s story and put a call to action for others who have been touched by the work Mummy’s Wish undertake.

My mother June, lives in Alice Springs. I suggested she could do her own hike and walk-up ANZAC Hill in the centre of town (608m). Initially she was hesitant and said no and we didn’t talk about it again for a few weeks. Then she phoned me one night and said she was going to do the hike. This was the start of her training and she started walking up ANZAC every 2-3 days. My mother is in her late seventies and had never fundraised for anything before! As soon as I made her a poster and set up her GiveNow page she was off drumming up support for her fundraiser! 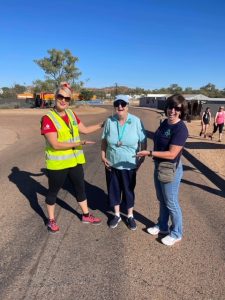 After a couple of weeks I could really hear a difference in her voice, she was so excited about her fundraiser! She was exercising and talking to people – this was particularly important as we weren’t long out of lock-down. I think it also helped with her grieving process to talk about Annette. Mum has lived in Alice Springs for nearly 50 years and the community really got behind her. Good friends Lucinda Moody and Louise Dona really helped mum on the day

June said of the hike “I have chosen to walk up ANZAC Hill so I can share Annette’s story, her courage and strength with the wonderful Alice Springs community. I can create more memories of my wonderful daughter even though she can’t be here to walk with me anymore. I love her dearly and it is special I can support a charity that was close to her heart.”

On the day about 40 people showed up and walked with mum up the hill. She even had the Alice Springs Mayor, Matt Patterson, ABC Radio, the local MLA Josh Burgoyne and a coffee truck ‘The Roaming Barista’ who donated ALL their profits to Mummy’s Wish. In the end, Mum raised just over $6,000! She was so excited and proud of herself she spoke about it months after!

The Mummy’s Wish Hike campaign got me in touch with a wonderful young mum named Rebecca Biggs. Bec was diagnosed with bowel cancer in 2020, she spent 40 days in hospital, had three surgeries, had four tumours removed and completed six months of chemo. She managed to keep up her 10km runs throughout her treatment and when she heard of the hike, she was very interested…but also very anxious and feared she would not be able to complete it.

Bec was very grateful for the support she received from Mummy’s Wish as it was able to help her focus on her treatment and getting better. Bec signed up her fundraiser and on the 24th October (just a couple months after her last round of chemo!) Bec and her kelpie Ryleigh completed 20km of Mount Cootha in Brisbane raising over $1,000! 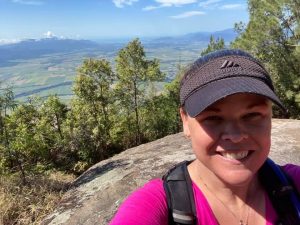 In 2022, we are going to continue to try and drum up support for people to take a hike for mums with cancer and raise awareness of Mummy’s Wish. We want to share Annette’s, June’s and Bec’s stories and encourage others to organise a walk or a hike to commemorate their own journey back to health or hike in memory of a loved one now passed. The hikes can be a walk around the neighbourhood or a more challenging goal. It would be wonderful to raise $25,000!

The activities can be anywhere in Australia and as challenging as you want them to be. It would be wonderful to connect and build up a community of women and their support crew. If you are interested in registering a hike or knowing more on how to do so please call Benita 0400 282 521 or email BenitaKaye@gmail.com.

For more details on the Mummy’s Wish Hike campaign and how to set up your fundraiser, click here.