Bridget, 33 year old mum of 2, was feeling excited about returning to work after 3 years of maternity leave, when her whole world came crumbling down around her. 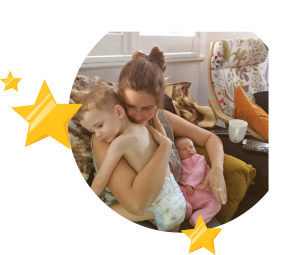 She was diagnosed with late stage bowel cancer and about to fight for her life.

One minute she was preparing to return to teaching, instead she faced multiple surgeries involving bowel resection, an ileostomy that had to be formed and reversed, a hernia and then 6 months of gruelling chemotherapy. This was not in Bridget’s plan.

She found chemotherapy to be a mental game.

“You would recover just in time to get blasted with poison all over again.”

“As well as the physical toll there is a significant family and emotional impact too – much more emotional than I expected.” 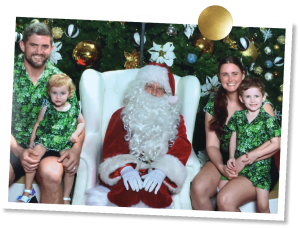 Bridget felt incredibly weak and faint, and at times was unable to hold her children in her arms for up to six weeks at a time.

“This was torture for my children and for me,” she says. “Each time I was in hospital, my son would develop a stutter. Clearly he was affected and struggled with mum ‘being sick’.”

But by far, the worst part of Bridget’s cancer journey was the ‘mum guilt’.

She felt guilty about everything – not having the energy to cook meals, clean and give her kids her love and attention. She felt guilty that she missed a whole year of her children’s lives and that she was a poor partner to her loving husband, who had put his life on hold to care for her.

“He would come home after work to a messy house, no groceries for dinner, crazy kids and an exhausted wife. He constantly lifted me up and kept our family going. I just wished that I could spend more precious time with my family”

Then a colleague at work mentioned her experience and support from Mummy’s Wish when she had cancer. Bridget immediately reached out to Mummy’s Wish’s support coordinators who helped her realise that whilst life was going to be hard for a while, it’s okay to ask for help and that Mummy’s Wish will be there to support Bridget and her family.

“They were super friendly and understanding, and they actually knew what I might need help with before I knew. I’m not sure how I would have coped without them.”