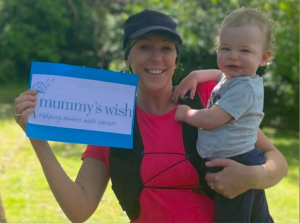 Champion of the cause best describes Melbourne mum, Samantha Warren. Diagnosed in 2021 with breast cancer when her son was eight months old, Sam decided to channel something really bad into something positive by passionately and happily sharing her story and giving back to Mummy’s Wish to help other mums.

“Every day there’s another mum in a doctor’s office being told “I’m sorry”. It’s an isolating and terrifying moment,” said Sam.

“I am a runner and had upped my training ahead of the Melbourne Marathon. I was in the shower after a run and found a lump in my breast. I felt a wave of terror. My body intuitively knew it wasn’t right and 45 minutes later I was at my GP.”

“A couple of weeks later I was back for the results and as my GP was on the phone to the nurse, her face dropped. I’ll never forget that face. She said to me: Sam, I’m so sorry, we’ll have to do more tests. And from there, it went from bad to worse.”

On her mammogram Sam’s cancer looked small, however, it wasn’t until surgery that Sam discovered it was double the size and had spread to her lymph nodes. It became a whirlwind of one thing after another – chemo, surgery, IVF. COVID restrictions made things more challenging, as Sam’s partner was unable to join her during treatments. 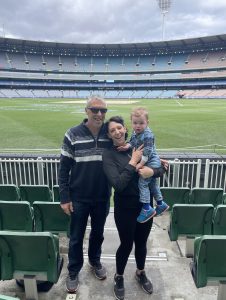 Social workers in hospital connected Sam with Mummy’s Wish. She recalls her first call from her support coordinator: “I was balling eyes out. It was an isolating experience and I was in shock but I felt listened to. Someone was there for me and for my family.”

“Parenting is the hardest part of the diagnoses. I was trying to be a normal mum but I felt so abnormal. I was seeing other mums on Facebook doing normal things and I remember thinking I can’t wait to have normal problems again.”

“My dad is a runner too and one day he said to me: Sam, you have to go for a run. I didn’t think I could do it but I started with a 2km run.”

“Initially my runs were mentally draining as I was obsessing about my cancer, so I decided to channel running into something helpful. Mummy’s Wish is so amazing – I asked my support coordinator how they got their funding and decided I was going to help.”

Sam started her Running through Chemo campaign with a target of 500km. Her family was supportive but made her promise to drop it if things got too hard. Initially her treatment and running was going well but she became ill from chemo and was ending up in ICU every couple of days. The doctors told her she had to stop running.

Sam was upset, so her 16-year-old cousin started ‘Tap in for Sam’ where people donated their kilometres, raising $5,000 and reaching 500kms. One year on, Sam is in remission and ran the Melbourne Marathon to again raise money for Mummy’s Wish. 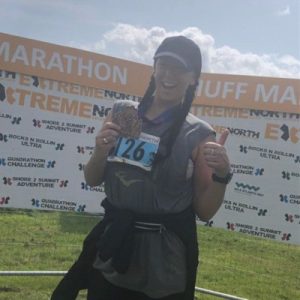 “The end of treatment was a triumph, but then the trauma hit. I was still connecting with Mummy’s Wish, who encouraged me to take the time to process my experience. I had PTSD and was trying to get back into parenting and being a normal mum. There is still fear when I look at my child and think what if,” said Sam.

“Some days I wake under a dark cloud and some days I feel like I am parenting my trauma over my child. But after a few months of therapy, these days are becoming fewer. Giving back through fundraising and inspiring others helps me to process and pushes me further. I look back and think how did I get through, but I am so grateful for every run I am able to do.”

As a national organisation that does not receive any government support, Mummy’s Wish provides practical help thanks to the generous support of donors.

Samantha encourages you to join her in supporting Mummy’s Wish by donating to the annual Christmas Appeal. Every donation will help provide vital practical support to mums in need.

DONATE to the Christmas Appeal 2022